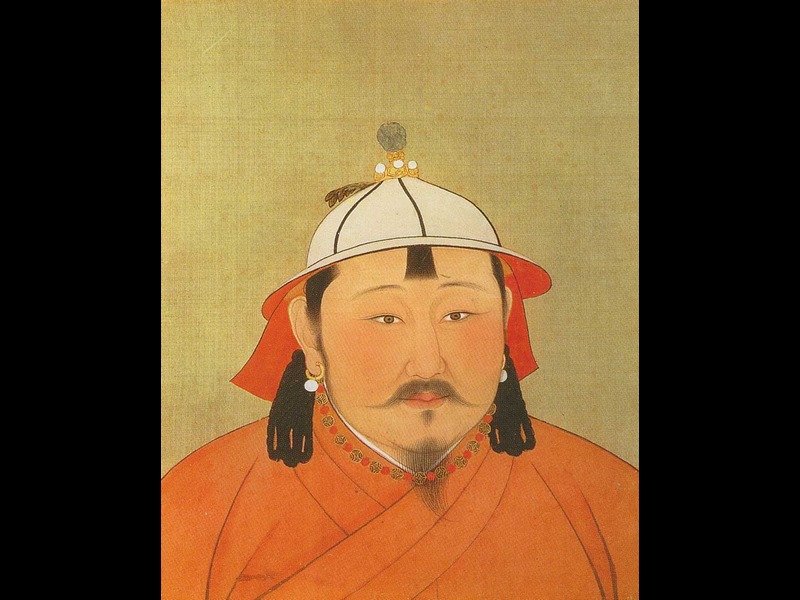 728 years ago today, Timur Khan was proclaimed Great Khan of the Mongol Empire and emperor of Yuan Dynasty China. The 6th man from the line of Genghis Khan to hold power in Mongolia, Timur’s control of the Khanate was good news, as he fully-applied the parking break to the greatest conquering army the world had ever known, likely sparing millions, and left the denizens of Burma, Vietnam, Japan, and Medieval Thailand, whom his grandfather Kublai had begun to try and conquer, in relative peace. READ more about the peaceful-ish Khan… (1294)

The previous Great Khan, Kublai, and even Genghis himself, are famous today among scholars for displaying religious and cultural tolerance in a way that other conquering empires rarely did. Kublai is one of the more fascinating figures for his dual-personality of a thoughtful philosopher king, and a unifier. But that “unification” was, suffice-it-to-say, largely unwanted, by those being “unified.”

Timur on the other hand, from the moment he gained control of the empire, halted and withdrew all armies from warring with the Dai Viet, the Burmese, the Champa (another part of modern Vietnam) and Japan. Nominally leaving behind an imperial army in neighboring Yunnan to quell a variety of rebellions, there would be almost no city-annihilating Mongol fury as there had been years before. He left power and the world with no legacy of conquest, merely with the solidifying of economic and social reforms started by Kublai, as well as the establishing of a lasting peace between the four Mongol Khanates, whose control of the Asian continent was between them almost absolute, and whose civil wars would have been genocidal in scope if Timur had not prevented them.

Happy 76th Birthday to the Scottish singer, songwriter and guitarist, known by the single name, Donovan.

He recorded a string of hits such as “Catch the Wind”,  “Sunshine Superman”, “Season of the Witch”, “Mellow Yellow”, “Atlantis”, and “Hurdy Gurdy Man”, and was inducted into the Rock and Roll Hall of Fame in 2012. 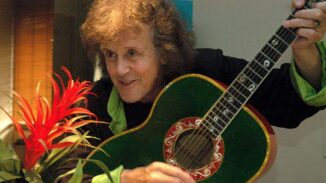 He reminisced at the time about teaching Lennon and McCartney his distinct finger-picking acoustic guitar technique.  He was studying Transcendental Meditation with the Beatles in India back in 1968, and recalls, “I used to play acoustic guitar all the time. In that nonstop playing, after we meditated, after we ate our health food, after we chased the monkeys off the table, we would play…and I taught them the styles which came from classical, New Orleans Blues, and Flamenco,” –and they wrote Blackbird, Dear Prudence, and more acoustic music for the White Album.

WATCH a video in which he tells the story and LISTEN to the new release from LUNARIAN “To Love You,” about Linda Leitch, his British wife and muse, released last month (1946)

From his inaugural address: “The time for the healing of the wounds has come. The moment to bridge the chasms that divide us has come. The time to build is upon us.” Whites and blacks filled the streets with jubilation, while a billion viewers watched on televisions around the world. (1994)

And, 153 years ago today, the first transcontinental railroad linking the eastern and western territories of the massive United States was finally linked by a golden spike that completed construction.

The last spike, made of gold, was driven in with a silver hammer at a ceremony in Promontory Summit, Utah. The coast-to-coast railroad connection which took seven years revolutionized the settlement and economy of the American West. It all started when President Abraham Lincoln authorized the Central Pacific Railroad of California to build a line going east from Sacramento. At the same time, the Union Pacific Railroad would lay track headed west from the Missouri River. Each railroad was given up to $48,000 in government bonds for each mile completed—so they raced to build as many miles as they could.

Finally meeting up with the Union Pacific team, the Central Pacific crews had completed about 690 miles of track through some of the most difficult terrain ever encountered by a railroad—cutting through the thick granite of the Sierra Nevada Mountains—and completing the line from Omaha, Nebraska to San Francisco. Many of the train loads of construction materials were transported via ships sailing around Cape Horn at the far tip of South America. (1869)

Happy 62nd Birthday to Bono, the singer-songwriter of U2, who last year became a healthcare hero when he and his bandmates donated €10 million to buy 20 million masks, goggles, visors, and gowns for medics on the frontlines in their home country of Ireland.

With his rose-colored glasses, the businessman and philanthropist (in the ONE Campaign, Product RED, and The Global Fund) has dedicated more than 20 years to eradicating global poverty—especially south of the equator in Africa—and has worked with most U.S. presidents going back to Bill Clinton.

When asked on a 2020 radio show about what he was doing these days, Paul Hewson (his real name) said he was caring most about “how he can be useful” in his life, so when the Minister for Finance telephoned the rock star after the pandemic began, Bono began calling diplomats and bartering with Asian suppliers to get the needed supplies for hospitals flown in to Ireland on a private plane.

Regarding turning 60 while in lockdown, the winner of 22 Grammys said, “I was actually going to have a quiet birthday anyway, you know the family. I’m just grateful I got here” —back to his Irish estate in Dalkey, overlooking the sea.