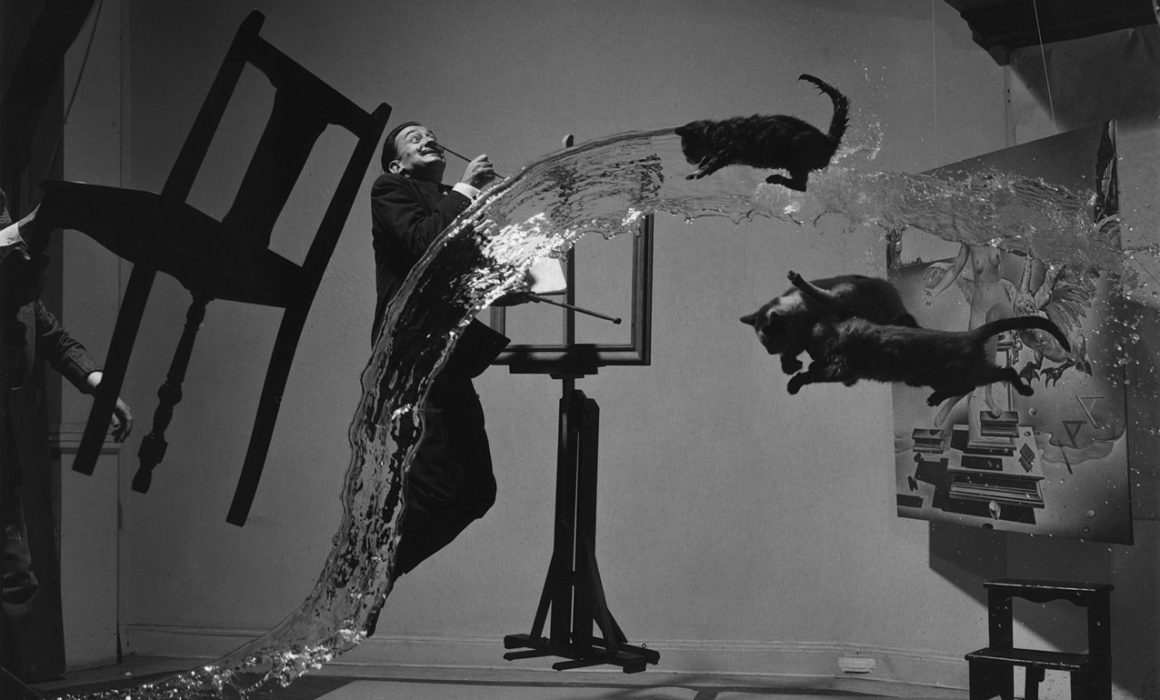 118 years ago today, Salvador Dali was born. Known for his striking and bizarre images, he is one of, if not the most famous surrealist painter in history. Inspired by the Renaissance masters, Dali nevertheless gravitated to the surrealist movements in the early 20th century. He would live in France for the duration of the Spanish Civil War, before moving to America and achieving commercial success. SEE some of Dali’s wildest depictions… (1904)

After returning to Spain in 1941, Dali described his style as “nuclear mysticism” containing elements of major scientific discovery, mysticism, and the classics. His most famous work came before this, The Persistence of Memory which depicts soft, melting wristwatches on a seashore, and is generally considered an ode to Einstein’s Theory of Relativity.

The Burning Giraffe is another perfect example of Dali’s nuclear mysticism. A tall woman, supported by crutches (a mainstay in Dali’s works,) is covered in drawers, an inspiration from Sigmund Freud’s pioneering theory of psychoanalysis. Dali said that “the only difference between immortal Greece and our era is Sigmund Freud who discovered that the human body, which in Greek times was merely neoplatonical, is now filled with secret drawers only to be opened through psychoanalysis.” Meanwhile the burning giraffe in the background is a “masculine apocalypse monster” and is a recurring motif in his paintings.

There are two museums devoted solely to Dali, one of which is in St. Petersburg, and the other in the town of his birth of Figueres, Spain.

251 years ago today, Laskarina Bouboulina, a heroine of the Greek War of Independence, was born. A naval commander, she was born in a Constantinople prison to a captain from the island of Hydra and his wife, who had been imprisoned by the Ottomans for being revolutionaries.

Bouboulina joined the underground organization that was preparing Greece for revolution. She bought arms and ammunition at her own expense and brought them secretly to Spetses in her ships, to fight “for the sake of my nation.” 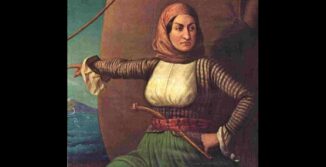 When construction of the ship Agamemnon was finished in 1820, she bribed Turkish officials to ignore the ship’s size; it later became one of the largest warships in the hands of Greek rebels. She also organized her own armed troops composed of men from Spetses—and used most of her fortune to provide food and ammunition for the sailors and soldiers under her command.

On March 13, 1821, Bouboulina raised her own Greek flag upon the mast of Agamemnon and the people of Spetses staged one of the earliest revolts several weeks later. She joined forces with ships from other Greek islands to begin a naval blockade of the port of Nafplion near Athens. She also became the first woman-admiral of the Imperial Russian Navy, which was assisting the Greeks until their victory nine years later. Bouboulina was killed in battle against Algerian pirates mid-way through the war, but she—and her ship—were later memorialized on a coin by the Hellenic Republic. (1771)

And, 112 years ago today, the U.S. Congress established Glacier National Park in Montana.

Along the Canadian border, the park encompasses over 1 million acres, two mountain ranges, 130 lakes, more than 1,000 different plants, and hundreds of animal species, including the threatened grizzly bear and Canadian lynx. (1910)

Also, Happy 81th Birthday to Eric Burdon, the lead singer of The Animals who sang House of the Rising Sun.

The Rock and Roll Hall of Fame inductee also sang on Don’t Let Me Be Misunderstood and We Got to Get Out of the Place. Burdon has often toured in the last decade and reunited with The Animals in Newcastle–the English city where the band formed in 1963, before becoming part of the British Invasion that took America by storm. Burdon also joined the band WAR to help create such hits as Spill the Wine, Paint it Black, and Why Can’t We Be Friends? (1941)

62 years ago today, the U.S. Food and Drug Administration approved of birth control as an additional use for the G. D. Searle drug Enovid, making it the first approved oral contraceptive pill following the largest drug trials ever run. The FDA had already reviewed the issue of safety when it approved Enovid’s use for menstrual disorders in 1957, but at last they relented when John Rock, the renowned Catholic obstetrician and gynecologist petitioned to let it be given to healthy women for long-term use for a social purpose—to control their own pregnancies. (1960)

And, 134 years ago today, American composer and lyricist Irving Berlin, who was considered one of the greatest songwriters in American history, was born in Imperial Russia. The composer of hits like White Christmas, Blue Skies, Puttin’ On the Ritz, I’ve Got My Love to Keep Me Warm, There’s No Business Like Show Business, Cheek to Cheek, and God Bless America, arrived in New York City with his Jewish family at age five escaping discrimination, poverty and brutal pogroms.

Berlin never learned to read music, but played his songs entirely by ear in the key of F-sharp (keeping all five notes of the pentatonic scale on the “black keys”) WATCH him demonstrate the unusual piano that helped him learn this, playing one of his humorous love songs, and interviewed by Dinah Shore and Tony Martin. (1888)